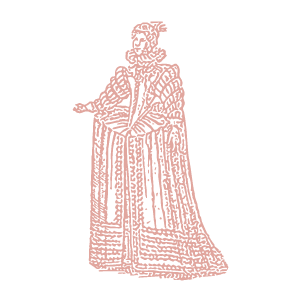 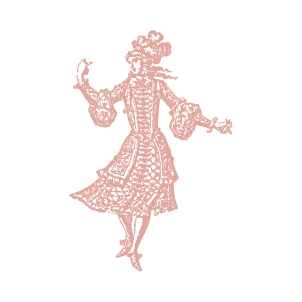 This years Festival will begin on 9 October on the 250th anniversary of Jan Klemens Branicki’s death. During the concert at the Aula Magna of the Branicki Palace in Białystok, Johann Adolf Hasse's Requiem in C will be performed. Like all festival events, it will be broadcast online, and, additionally, it will be broadcast live on a large screen in the city centre next to the Town Hall. The Choir of the Medical University and the Orchestra of the Diletto Early Music Ensemble will perform under the direction of Anna Moniuszko and soloists. During this year's festival, there will also be references to the 230th anniversary of the adoption of the Constitution of 3 May 1791 and the Mutual Engagement of Both Nations on 20 October 1791, which strengthened federal relations between Lithuania and Poland. Performed by the Morgaine Ensemble (Lithuania) in cooperation with the Jericho Ensemble (Poland) and GS Ansamblis (Lithuania), we will hear (on 23 October) the "Oratio Dominica - Cyprian Bazylik and the Roots of Evangelical Hymnody" concert, performed by the Starosielskie Bractwo Śpiewacze and Witold Broda – the concert on the occasion of the jubilee of the 230th anniversary of the Constitution of 3 May 1791 - Pious Songs by Fr. Karpiński (12 November). The festival also includes chamber concerts for the invited foreign guests. On 2 November, the duo of Luise Baumgartl’s - oboe and oboe d'amore and Martin Stadler - oboe, flute, harpsichord will perform at the Branicki Palace.

All events are available online.
You are welcome to come. 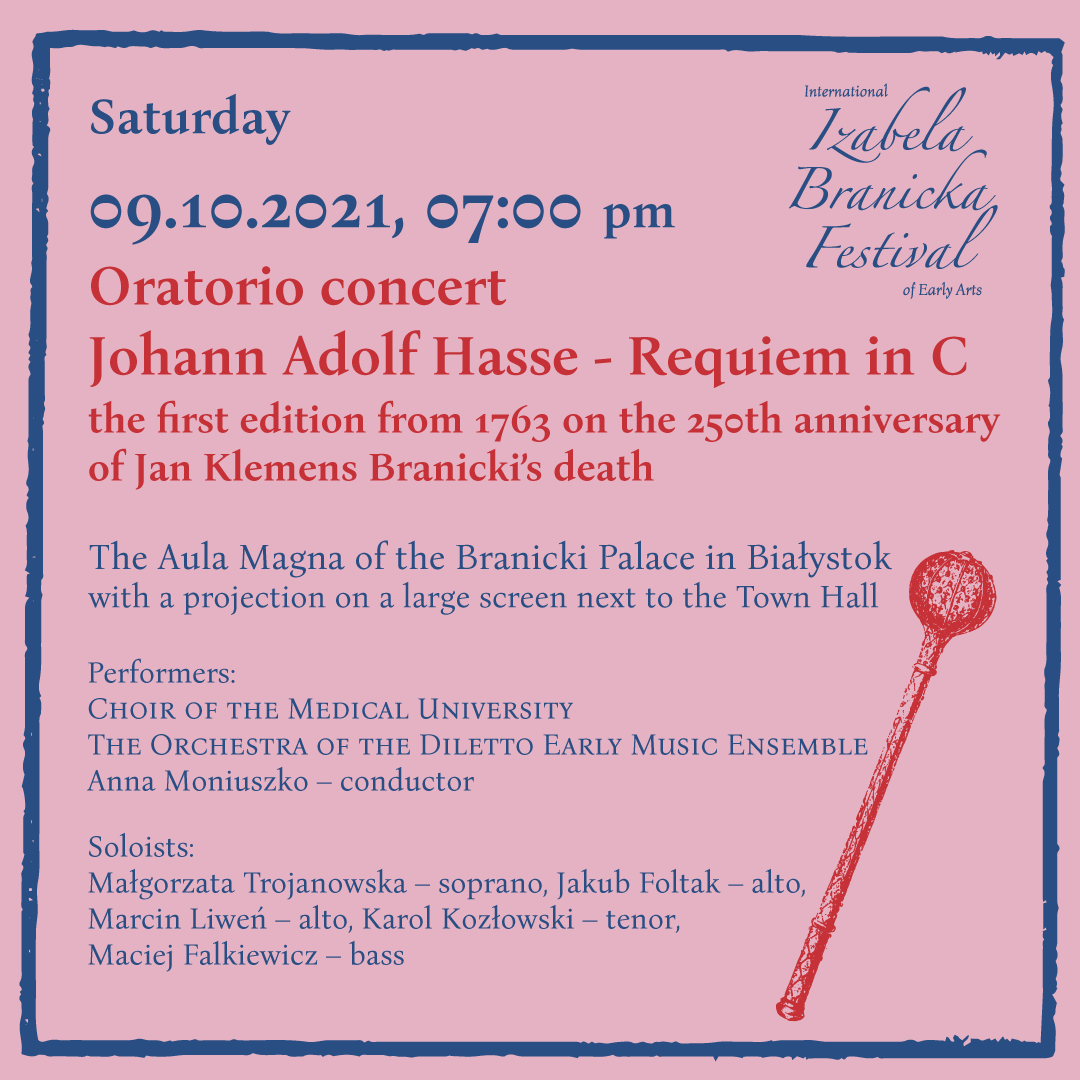 2021 is the 250th anniversary of the death of Jan Klemens Branicki, husband of Izabela Branicka. The Białystok councillors have established this year as Jan Klemens Branicki’s year. Therefore, the references to this very important event in Izabela Branicka’s life and reminders of the person and merits of the owner of Białystok, Hetman Jan Klemens Branicki, cannot be missed during the Izabela Branicka Festival of Early Arts. He contributed to the development of Białystok in an unparalleled way, led to the renewal of its charter in 1749, and the family's palace is still a tourist symbol of the capital of Podlaskie Voivodeship. He was the last male representative of the Branicki family of the Gryf coat of arms, called the richest magnate of the Commonwealth. He owned 12 cities, 257 villages and 17 palaces. He was also a patron of culture together with Izabela Branicka. The Opernhaus built by him was one of the most famous buildings in Poland. A ballet group and an orchestra operated in the Opernhaus until the Hetman's death,

Due to this special circumstance, we will start the festival on 9 October on the anniversary of Jan Klemens Branicki’s death with the performance of Requiem in C by Johann Adolf Hasse. The work was not chosen accidentally. It has truly royal splendour, because it was performed during the funeral of the last king of Poland from the Wettin family - Augustus III the Saxon, whose ardent supporter was the Grand Hetman of the Crown, Jan Klemens Branicki.

Johann Adolf Hasse was a conductor for 30 years at the courts of August II the Strong and August III - the Saxon electors, and, at the same time, the successive Polish rulers. This fact represents the source of the composer's interest in Polish music, to which he often refers in his works: in his compositions, we can find fragments with the words alla polacca or arie nel gusto polacco. Hasse also visited Warsaw many times. There, in the years 1758–1762, the Dresden ensemble accompanying the king performed the 12 operas composed by him. There are indications that Hasse, while being with the court of Augustus III in Warsaw, also visited the Branicki Palace in Warsaw and Białystok, where he was hosted by the second person after the king in the country - the Great Crown Hetman Jan Klemens Branicki. Due to the connections with the royal orchestra of the concertmaster of Branicki's band - Antoni Kossołowski (Kozłowski), it is likely that Hasse's works were also performed at the Opernhaus in Białystok.

J.K. Branicki died in Białystok on 9 October 1771. He was buried in the Church of Saints Peter and Paul in Kraków. Thanks to the foundation of his wife Izabela in 1778, a tombstone of the hetman was erected in the old parish church in Białystok. It contains an urn with Branicki's heart. The performance of the royal Requiem will be a worthy expression of gratitude and a kind of tribute to the builder of Białystok by its contemporary inhabitants. 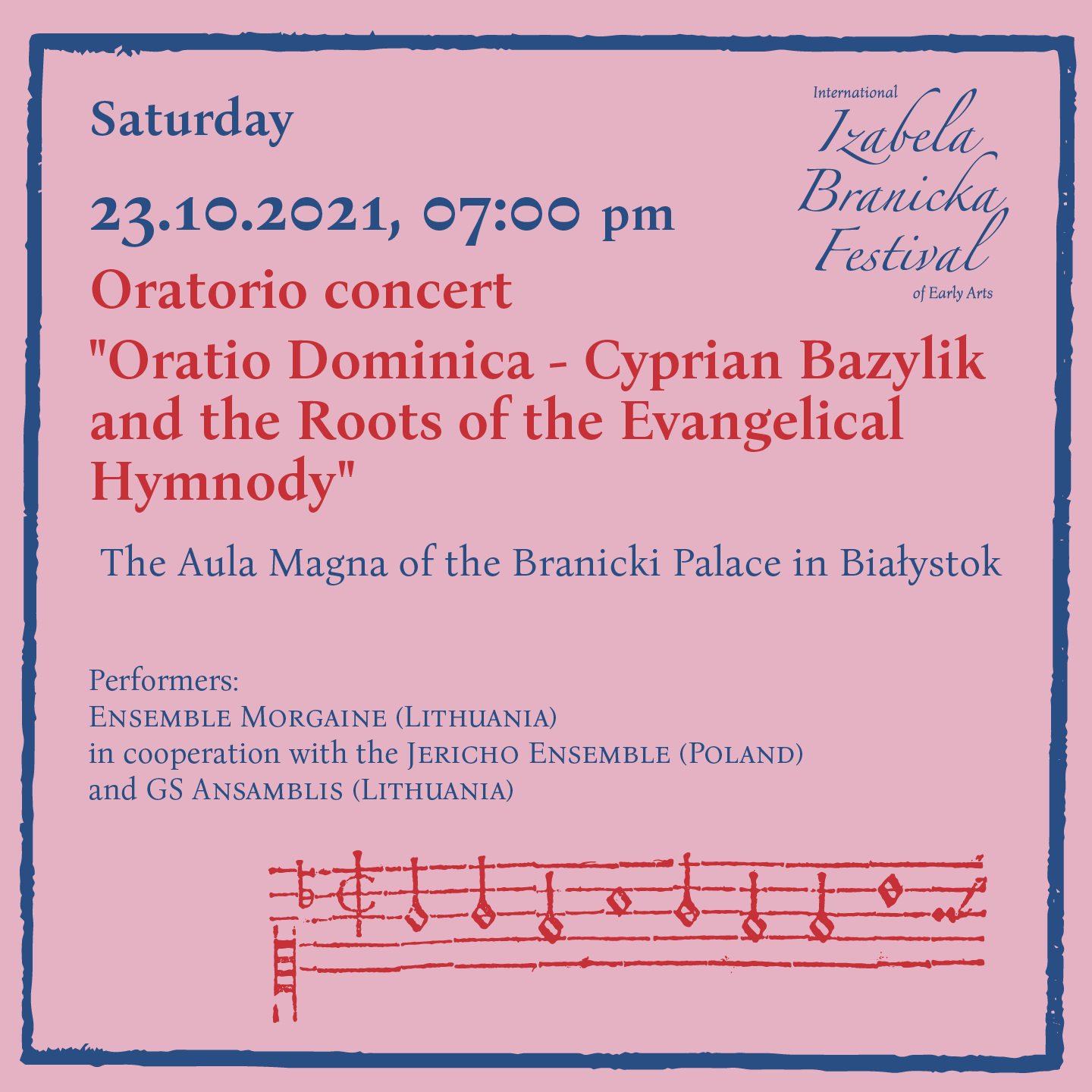 The Aula Magna of the Branicki Palace

Poland and Lithuania celebrate the 230th anniversary of the adoption of the Constitution of 3 May 1791 in 2021, and the Mutual Engagement of Both Nations was adopted on 20 October 1791. It strengthened the federal relations between Lithuania and Poland. Around this date, a concert by artists from Poland and Lithuania will be performed. The concert programme was created as part of the cooperation of artists from Lithuania and Poland for the purpose of continuation of the "Evening Song / Pieśń wieczorna / Giesmė vakarinė" project, which was recorded and released on CD in November 2020. This initiative, important for discovering the common roots of the culture of the Polish-Lithuanian Commonwealth, using both languages (the original Polish and the first Lithuanian translations at the time), is intended to present Cyprian Bazylik’s Opera Omnia. Cyprian Bazylik (born in Sieradz in 1535, died after 1591), called Ciprianus Siradiensis, Cyprian from Sieradz, monogramist C.B., C.S. was a Polish composer, writer, poet, translator and reform activist (Calvinist). 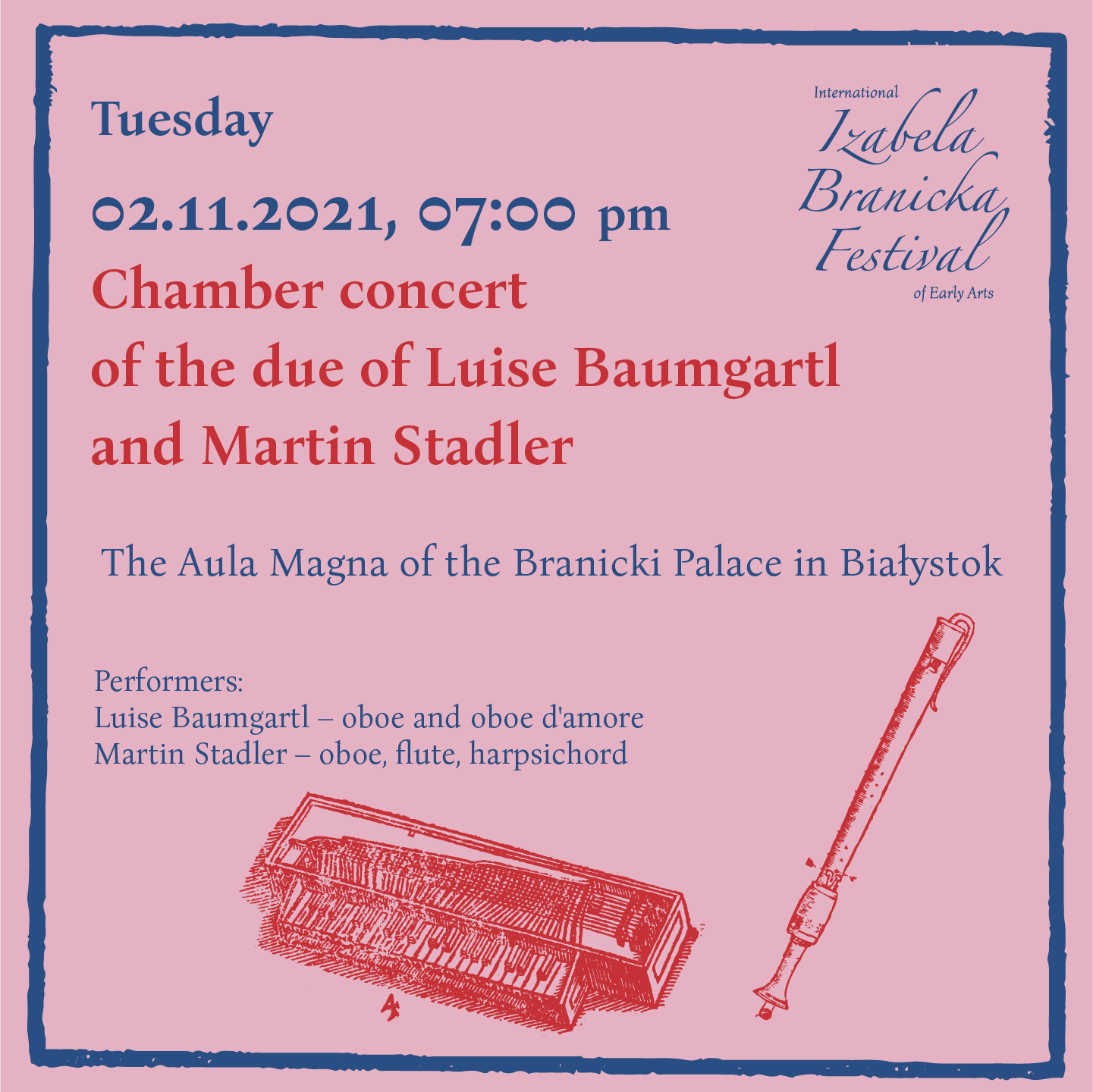 Chamber concert of the due of Luise Baumgartl and Martin Stadler

Luise Baumgartl baroque oboe, oboe d’amore Luise Baumgartl grew up in a house with musical traditions and studied modern oboe under the direction of Gerd Albrecht Kleinfeld at the Hanns Eisler Musikhochschule in Berlin and under the direction of Professor Hans Elhorst at the Musikhochschule Freiburg. Then she devoted herself to historical performance practice and studied the baroque oboe with Martin Stadler at the Hochschule für Künste in Bremen. She has won awards at many international competitions. She is a respected oboist in Poland and abroad, playing with various orchestras and chamber ensembles. She also enjoys teaching privately and at the Jugendmusikschule in Kreuzlingen (CH).

Martin Stadler baroque oboe, recorder, harpsichord Martin Stadler studied playing the recorder with Conrad Steinmann and Matthias Weilenmann at the Musikakademie in Zurich and with Walter van Hauwe in Amsterdam. Then he completed his Baroque oboe studies with Ku Ebbinge in The Hague. After graduation, he played 1st oboe at the Niederländische Bachgesellschaft until 2017. There he participated in the complete recording of all the works of J. S. Bach. The recordings that have already been made can be heard and viewed at allofbach.com. 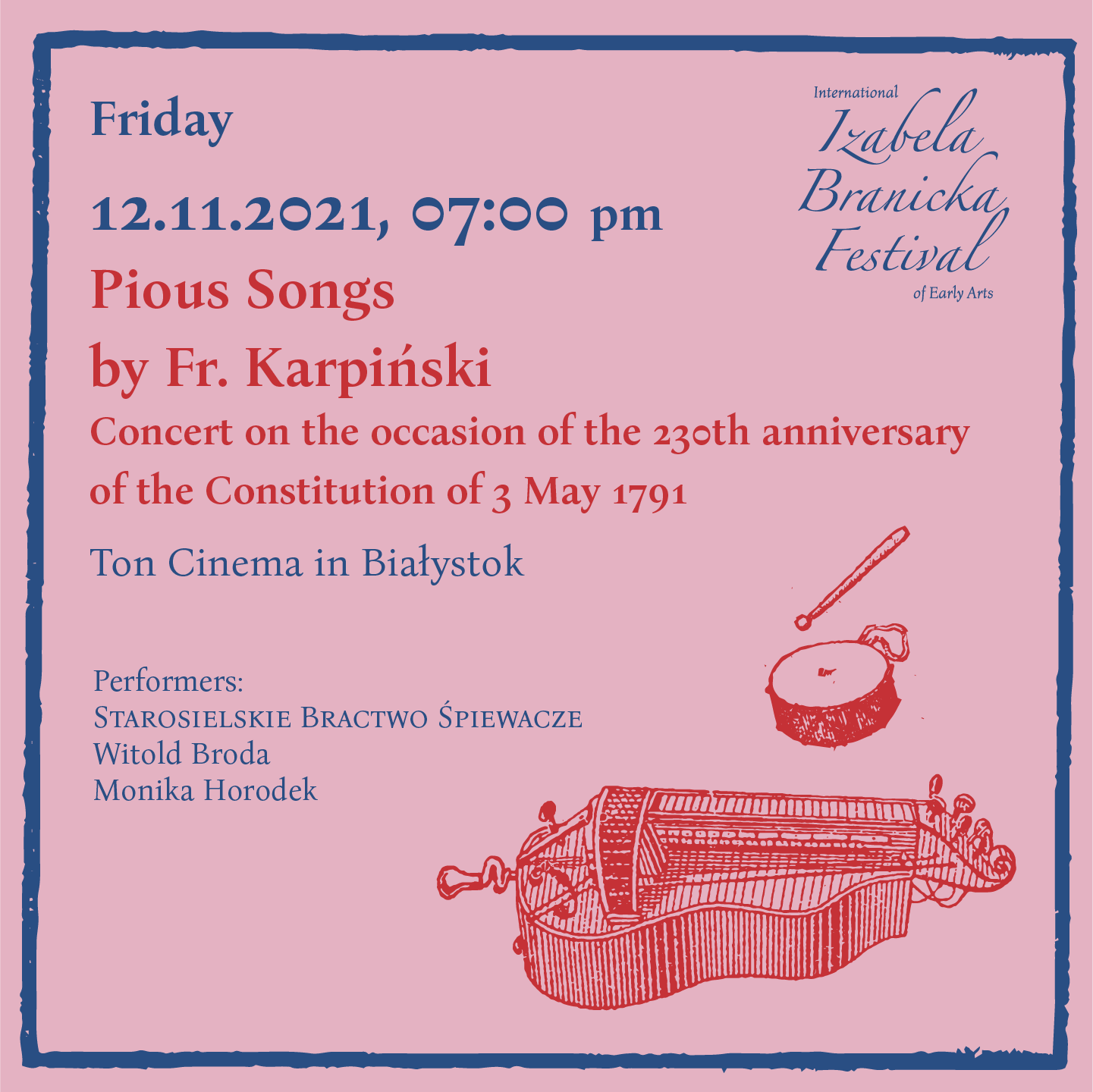 Concert on the occasion of the 230th anniversary of the Constitution of 3 May 1791 - Pious Songs by Fr. Karpiński

On the occasion of the first anniversary of the Constitution of 3 May 1791, Fr. Karpiński published a volume of Pious Songs in Supraśl near Białystok. Today, 230 years later, a male singing group operating in one of the districts of Białystok - Starosielskie Bractwo Śpiewacze wants to commemorate this important anniversary for all Poles through a concert including Pious Songs by Fr. Karpiński in historically informed studies with the participation of Witold Broda and Monika Horodek. The project is a continuation of work on rediscovering and popularising songs that have not been musically edited and published so far and which contain a lot of religious and patriotic content that is relevant and important for Poles today. As the last King of Poland, Stanisław August Poniatowski, said, "These songs, with time becoming a common voice, will teach the nation its obligations towards God and people, pure customs and love for the homeland."