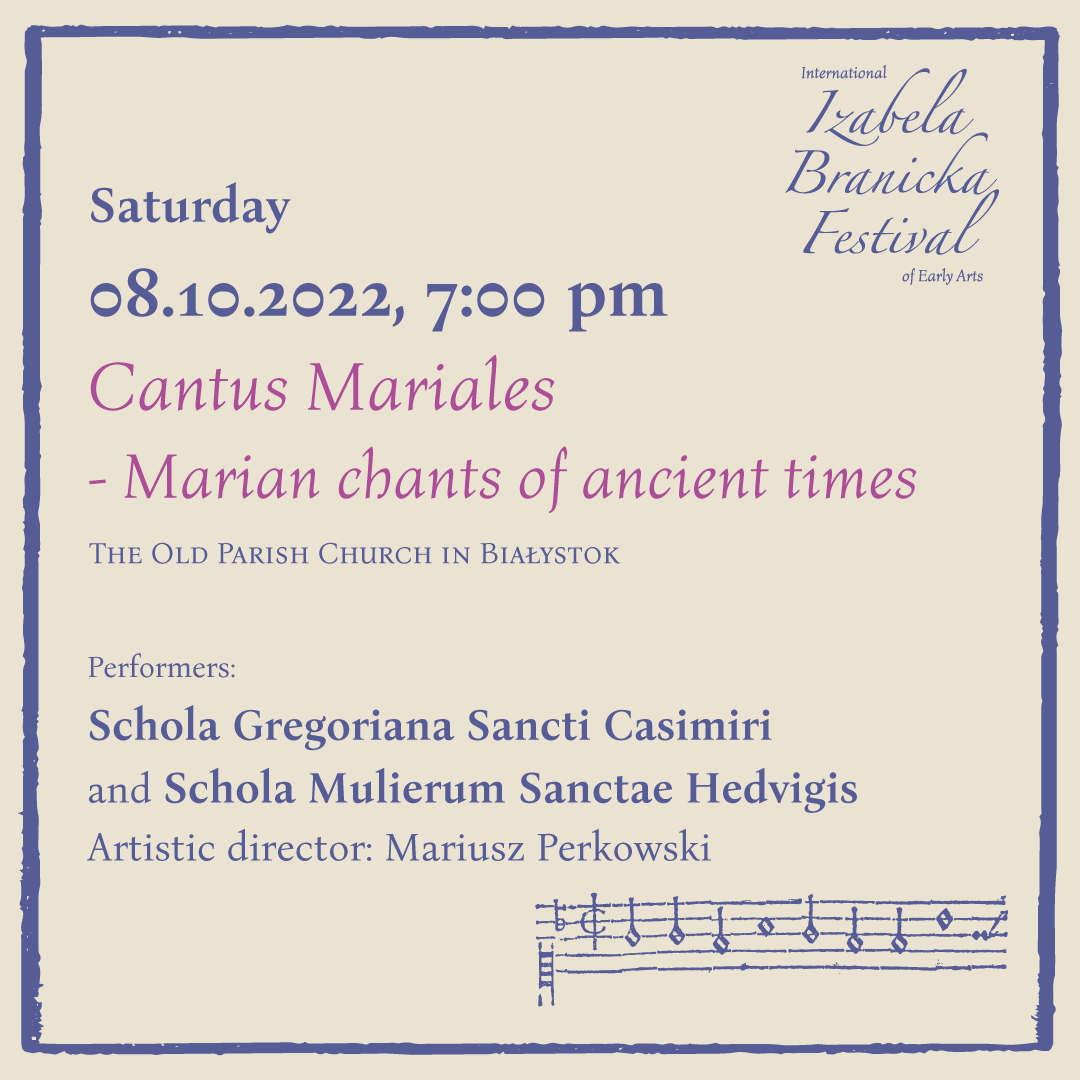 The Old Parish Church in Białystok

The "Cantus Mariales" programme is the culmination of work on popularising medieval and Renaissance Marian chants, which for many years have been performed during concerts by the Male Singing Ensemble Schola Gregoriana Sancti Casimiri under the direction of Mariusz Perkowski. The songs from many sources of European Christianitas, i.e. civilisation, built on the Christian foundation of cultural identity, will be presented during the concert. There will also be Polish works, currently forgotten and unknown to a wider audience, and a choral from post-Tridentine books published by Piotrkowczyk in the 17th century. Monodic and polyphonic singing will be performed in a historically informed manner, both a capella and with the use of ancient instruments, e.g. hurdy-gurdy, viola da mano, lute, medieval percussion and choir organ.

Male Singing Ensemble SCHOLA GREGORIANA SANCTI CASIMIRI (St. Casimir's Gregorian Schola) - founded in 2008. It includes singers interested in the performance of traditional church music, especially Gregorian chant. The artistic management of the ensemble is exercised by Mariusz Perkowski. The Schola made its debut performing at the Łapskie Te Deum Sacred Song Festival in 2008. Since then, it has participated in numerous concerts, which are an attempt at a musical reconstruction of the services of the 17th century and 18h century by performing monodic singing. In this regard, it constantly cooperates with the Diletto Early Music Ensemble. In this capacity, it has also cooperated with the Polish Orchestra of the 18th century under the direction of Paul Esswood. The Schola regularly takes part in festivals, including the "Battle of Białystok" Reconstruction and Historical Festival, the Festival of Ancient Arts - Izabela Branicka’s Name day (annually), Fr. Wacław Rabczyński 8th International Festival of Organ and Chamber Music, the 3rd edition of the Mońki International Music Evenings at St. Albert. More than once, a concert with its participation inaugurated the beginning of a given festival, which took place in the case of the Mysterium Fidei Festival (2013), the 6th edition of the Organ and Chamber Music Concerts in Ełk, the Fide et Amore Festival of Religious Creativity in Żory and the Nicholas of Koźle Festival in Kędzierzyn Koźle in 2016 and 2021. The ensemble has recorded the following recordings: "Opera Omnia by Andrzej Siewiński" for the DUX record company, where it accompanied the "Diletto" Early Music Ensemble, as well as the " Pious Songs by Franiciszek Karpiński" and "Christmas Carols of the European Christianitas", containing medieval songs related to the Christmas period.